Besides, discretion is in our DNA and thus many other famous people, Italian and foreign, now living in Le  Marche, so completely absorb our lifestyle that they do not let on most people about being habitually  resident in our region.

To visit Le Marche region is a pleasant discovery: here is a land marvellously rich because it is diverse, one might say it is plural, just like its name. The sea, the mountains, the hills, cities and medieval towns, places full of  natural wonders and breath-taking views, fragments that abound with stories and traditions, despite the  strong push forward of modernity, because Le Marche are a place where past, present and future know how  to blend in an incredible and harmonious mix. A land with a solid impressive past, that has many gifts for  those that explore it today.

Le Marche, the only Italian region with a name that is in the plural form

There are many travellers guides on Le Marche, and all of them are excellent, however as someone born and  raised here, a true Marchigiana, I would like to give my small contribution for visiting Le Marche, starting off  by describing the inhabitants of this land: friendly and reserved people, perhaps somewhat introverted at  times, but always generous and with a big heart. The Marchigiani are a honest people of very few words,  simple and cheerful but also a hardworking people. Almost never tumultuous, when they see an injustice  they are fired by a righteous passion, thus it is not by chance that for a long time, in the past century, Ancona  was the homeland par excellence of many anarchists. The Italian-English artist Joyce Lussu, who lived in Le  Marche in the 20th Century, wrote “Sherlock Holmes. Anarchici e siluri” that is indeed set right here. 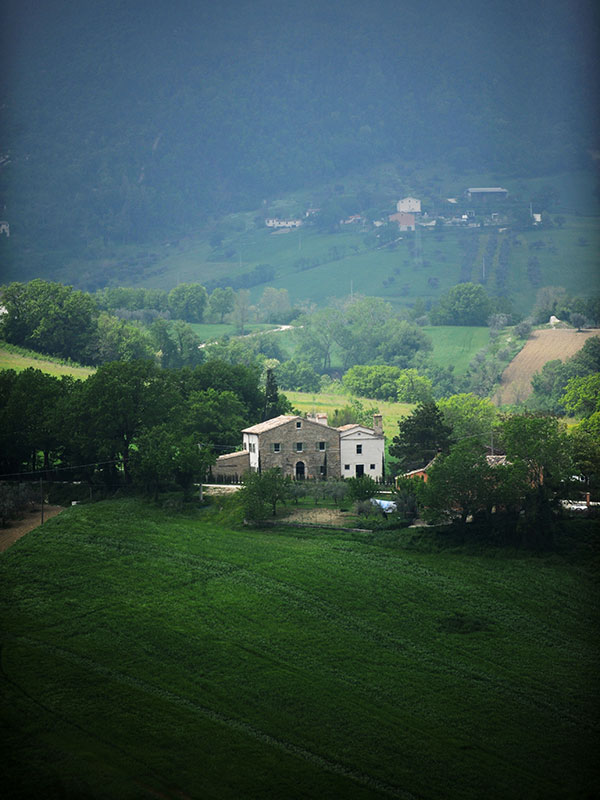 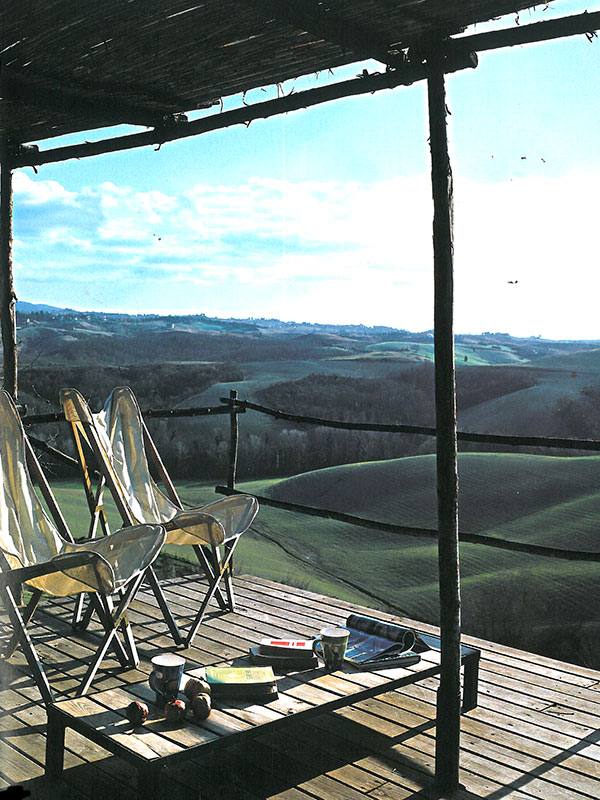 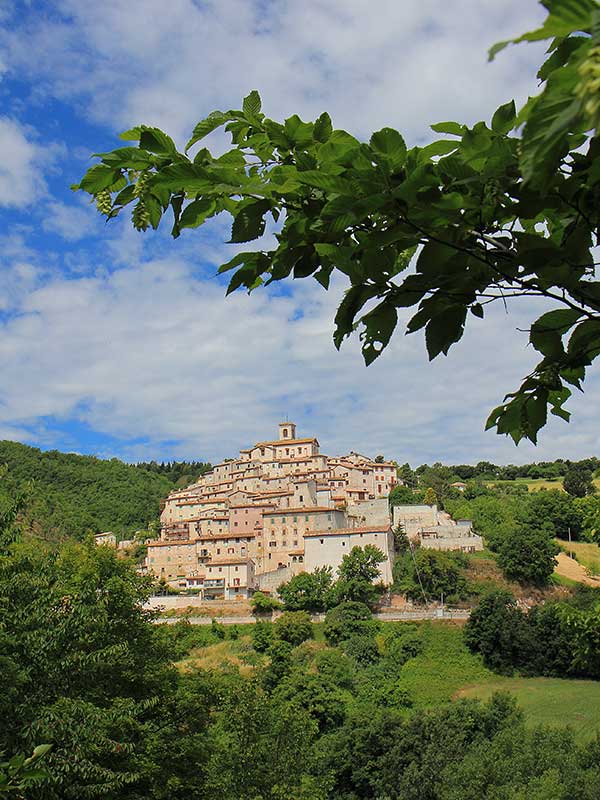 The origins of the name

Le Marche, it must be said, are the only Italian region with a name that is in the plural form. The origin dates  back to the Holy Roman Empire, in 800 CE. At that time Charlemagne became Emperor and he divided his  possessions into fiefdoms, each one of them entrusted to a noble Marquis. The term “marche” derives from  the German word “mark”, which means “border”. Hence, at that time Le Marche were a group of  possessions delimited by a “mark” (especially well known where those of Ancona, Camerino and Fermo).

The origins of the emblem 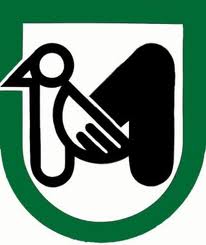 The story of the emblem that represents the region is even more peculiar. The law with which the coat of  arms was adopted, nr. 13 dated 15 March 1980, says: “The choice originates from an ancient tradition,  which narrates that the Sabine people, while crossing the Apennine mountains during the “ver sacrum” (Sacred Spring) carried with them a sacred totem, a holy bird, the woodpecker. Maybe not everyone knows  that the bird in the coat of arms is indeed a stylised green woodpecker, that rests on a capital M which, of  course, stands for Le Marche. The woodpecker was sacred for the Phoenicians, who inhabited our lands  during the Iron Age, between the Second and First Millennium BCE, leaving indelible traces of their passage  and trying, for the first time in history, to unite populations and cultures that, until that moment, were  mostly nomadic and incredibly diversified.

The story of the Phoenicians resides a long way back in time. They were followed by, many other great  figures that dwelt in this incredible land, and called it their home. Among them, we should mention excellent  painters like Bramante and Raphael or Raffaello Sanzio, as well as the great composers Gioacchino Rossini  and Gaspare Spontini. Giacomo Leopardi, with his hometown Recanati, and then Enrico Mattei, Maria Montessori and Beniamino Gigli.

Le Marche region and the most famous places

And now, a short description of the most prominent places in Le Marche, without forgetting that every place  that I do not mention, for obvious reasons of length, is worth a visit just the same; in primis it is worthwhile to wander the countryside, in summertime, especially at sunset, without a care about where you are going,  simply roaming around on the hills. The sheer pleasure of discovering unexpected landscapes, shapes and  colours: an infinite sea of green and yellow, like in one of Leopardi’s poems.

Let’s start from Ancona and the Riviera del Conero, with its most renowned jewel: Portonovo. This charming  bay, surrounded by the greenery of Mount Conero and by the Adriatic Sea, in summer is brimming with people enjoying the beaches, yet it’s always worth visiting, maybe at the end of the day, to admire the  sunset on the western side of the Portonovo pier.

You will discover breathtaking views and landscapes. The sea is green and yellow towards the infinite horizon, as described on a poem by the local renowned artist Giacomo Leopardi.

You will discover breathtaking views and landscapes

The city Ancona may not be easy to understand at first, but if you walk through the old town, the Duomo of San Ciriaco maybe you can get the real core of this town. The Duomo is the place chosen as the landscape for Luchino Visconti’s film “Ossessione” (1943), and Ancona is the setting for Nanni Moretti’s “La stanza del figlio” (2001): both films give an insight of this town.

The Dome should be seen early in the morning or at sunset, that’s because it was built at the junction between east and west where the sun rises and sets on the sea, if you look at its beautiful Romanesque church of the central rosette, simple, yet perfectly linear, that is where the two points cross.

Other places worth a visit are the old lighthouse, the camp of the Jews – where there is a feeling of being on an island in the middle of the Adriatic sea – full of scents and spices. Along the Avenue of Victory you can reach the famous Passetto with its caves using the lift. These places are well-known by the inhabitants of Ancona, but unfortunately unknown to most tourists. Ask at the restaurant of the famous “mussels Portonovo”, especially good between June and August and eat it with parsley and lemon. Also other towns are worth a visit between these I quote Ascoli Piceno, with the most beautiful square in Italy, and a beautiful old cafe such as “Caffè Meletti”.

Urbino, an authentic jewel of the Renaissance, with the Ducal Palace built by its most beloved inhabitant and one of the greatest political and military strategists of the Italian Renaissance: Federico da Montefeltro. I advise you to read the story of this man who lived in the fifteenth century, his illegitimate birth, his career and his enlightened Renaissance grandeur of man: you couldn’t fall in love with him! I look forward to watching a film about this historical figure, famous in paints by artists such as Piero della Francesca, who worked for the Duke for many years.

In Urbino you can find paintings of Raffaello, who was born there, Paolo Uccello, Piero della Francesca, the study of inlaid and Pedro Justus of Ghent Berreguete. Find the home of Raffaello and the Mausoleum of the Dukes, the landscapes are painted by Federico Barocci, one of which is at the Museum of Madrid, and will enchant you.

The study is open to the west, towards Tuscany: Federico da Montefeltro was a man of arms of Lorenzo de ‘Medici, that was the way to look at his Lord, but he was a man of arms also for the Sforza family of Milan, the d ‘Este, of Aragon, and finally the Vatican who rewarded him by giving him the title of Duke. With the proceeds of his battles, he built the Ducal Palace in Urbino, also in honor of Battista Sforza, the woman he loved and then married. It is worth to go and see, really.
At the restaurant, ask for the dumplings in cream sauce with vegetables, a specialty of the place.

But wandering around Le Marche, it is worth to pay a visit at Loreto and its famous Basilica, the mausoleum of Bramante, Recanati and Macerata, with its famous Arena Sferisterio, second in size only to the Arena of Verona, where in summer you can find great shows like Madama Butterfly, and many others.

What about Camerino and San Severino? Beautiful, indeed. Jesi, and its Teatro Pergolesi , a tribute to his dearest inhabitant, (but in Jesi also Valeria Moriconi and Virna Lisi, Valentina Vezzali and Roberto Mancini were born). The inhabitants of Le Marche love theater and culture in general, in Pesaro you can find a library every fifty meters! Senigallia is a beautiful town on the coast, lively and trendy, with a beautiful and wide beach, suitable for both summer and winter walks and dine at one of the many restaurants on the beach, there are two in particular that are awarded by the Michelin Guide. Then there are Sirolo and Numana, two small beads attached to the Mount Conero. San Benedetto del Tronto also deserves a special mention for its beach and palm trees…

Le Marche abound with legends and mysteries set on beautiful beaches and castles that can still be visited today: from Mitì, the Conero mermaid, to the forbidden love between Paolo and Francesca, rendered immortal by Dante. Furthermore, to reiterate the extraordinary plurality of this region also linguistically, the  sentence “better an egg today rather than a chicken tomorrow” sounds like “Mejio un’ou oggi che una  gajina domà!” in Ascoli and “Mej n’ov ogg’ che ‘na galina dman!” in Fano.

Finally, talking about present times and new technologies, Le Marche don’t miss a beat: they have been now  for many years the most “Green” region of Italy, thanks to the attention towards the environment, to  recycling, promoting nature trails and protecting its enchanting valleys, in addition to a dense cycle network,  all experiences to enjoy even during a vacation.

To visit Le Marche is an unforgettable experience; once tried, it’s just impossible to live without it easily.

I sure hope you’ll discover other places of this beautiful region, and maybe you will choose a small remote village in the countryside as you new home. And there are hundreds of them still to be discovered! Enjoy your trip!

The houses you can see on section PROJECTS been restored or rebuilt according to their state and the difficulties to solve.
MCH also gives architectural consultancy thanks to a tight collaboration with Studio Marinelli. Our long-standing collaboration is reinforced by the great experience of architect Sergio Marinelli, who is an expert in restoring rural and historical buildings.
Our turn-key service includes all that you need: from the construction company to the gardeners’ team, plumbers, painters, the most skilled but also the cheapest. Ask for a quotation, we are at your service.

Owning a home is a keystone of wealth… both financial affluence and emotional security.